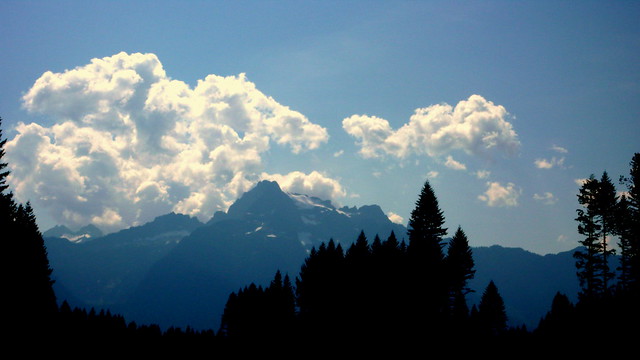 Standing around with 34 other mildly cold, brightly dressed randonneurs under I5 at the Green Lake Park and Ride in Seattle*, ride organizer Jeff Loomis started us off with some invaluable advice – if you don’t want to get lost on the Interurban Trail, follow someone local. Adam Morley made some quip about getting lost on the trail the last time he was out and Andy Spier and I simultaneously call out, “Don’t follow that guy!”

Fortunately, Audunn Ludviksson finds his way to the front with Joe Llona and the rest of us can stop thinking about navigation. I fall into conversation with Richard Wolf about traveling in Europe and India and his audax-style rides with MUC Montpellier.  I’ve never done an Audax ride, but they sound interesting. Everyone stays together in one group and a maximum pace of 22.5km/h is maintained by the capitaines de route who are responsible for the peleton’s pace, safety, and decision making. And you can’t pass them.  You can read the rest of the rules here in fairly simple French.

There was, eventually, some confusion about the route along the trail and everyone but Joe Llona stopped. I figured Joe knew where he was going, but the group turned around and took the road – we could see Joe flying downhill into the foggy valley as we waited at a stoplight. Joe’s son Jesse picked up the pace to catch his dad and I lept for his wheel. Pretty soon we were going 25mph and I was feeling le goût de l’effort in a very good way.

At the bakery in Snohomish, Joe ordered a double espresso and a chocolate croissant. That sounded good to a few of us in line behind him, so we ordered the same. I guess Joe was our capitaine de café. 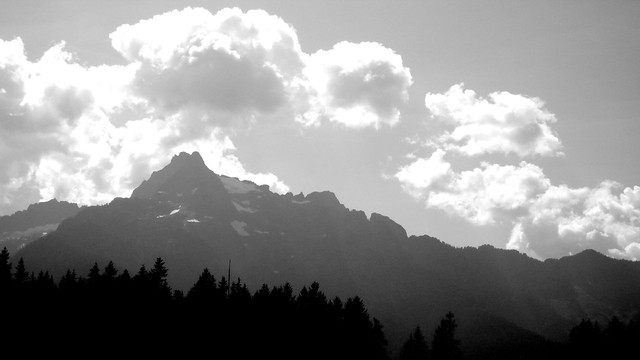 I didn’t feel like sticking around too long, so I left the bakery with Richard and Chuck Mangold. The fog had burned off the valley and we set a moderate pace on the Centennial Trail where quite a few people were out to enjoy the tail end of summer. Eventually Steve Frey caught up to us and we sped up a bit to keep with him. By Arlington, we had a fairly large group, but most of them stopped for water and a bathroom. Steve and I kept rolling and, with fewer people on the path and no one to avoid on WA-9, were holding steady at about 20mph.

The turn onto Finn Settlement road felt like the authentic start of the ride, to me. Everything up to that point was familiar and dominated by multi-use paths. But after this turn, the roads started to roll and twist and the fun really began. We spun up the hills and descended in our aero tucks. My new Garmin Edge 500 was getting in the way of my left hand and I was trying to figure out how to grip the bars in a more effective way without sticking out my elbow. Steve has a computer in the same spot and holds one hand against the stem, but I didn’t feel stable that way.

As we rode in the dappled shade of the Maple trees and past farms, we ended up talking about tires, riding technique, and some of Jan’s theories. When I wondered aloud how to get another 3 hours off my 600K time to break 24 hours, Steve mentioned that Jan, in addition to riding fast, works to be very efficient through controls. I don’t tend to stick around controls for an excessively long time, but later in the ride, approaching Barlow Pass, I decided to see just how quickly I could get through each stop for the rest of the ride. It was a fun challenge and I ate more on the bike than off.

“Hmm. I seem to be having a bit of a mechanical,” Steve tells me as we crest a hill. We pull over and he sees that his non-driveside bottom bracket cup is threading out. A crank puller and BB tool are not typically carried on a ride, so there’s not much we can do. He adjusts his front derailer to make up for the migration of the spindle and we continue riding. Soon we’re pedaling at a steady clip with the Skagit river on our left and a canopy of broad maple leaves above us, ignoring the issue and enjoying the ride. 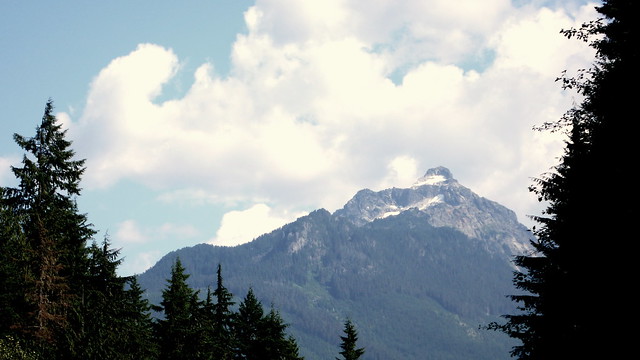 At the control in Concrete, though, Steve finally decides it’s a better bet to head to Mt Vernon in search of a bike shop (and then home) than to head deeper into the mountains with a BB coming out. We drink some soda (I find some root beer with 270 calories in the bottle – just what I need to stave off bonking after not eating enough early in the ride) and wonder who drinks this crap regularly and in great quantities. Right then, a guy comes out of the store with two boxes of soda, loads them into his car, and drives off.

After about 20 minutes I decide to leave and, at the same time, Ward Beebe pulls into Concrete a little ahead of a group of riders. That was the last time I saw other randonneurs until the finish. I pedaled along the Sauk river, trying to keep a high cadence (80-100 rpm), enjoying the rising temperatures and the mix of maples and increasingly many conifers as the elevation increased. At one point there is a fork in the river where a white branch flows into a blue branch, it made me think of the “Meeting of the Waters” in the Amazon River (which I’ve never seen in person). 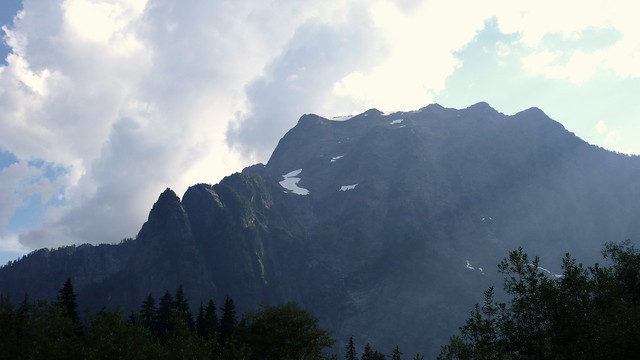 I decided to skip Darrington as I had enough food to make it to Barlow Pass. A girl with a garage sale sign and a cigarette (was she really old enough to smoke??) called out to me, “How far are you riding?” “250 miles!” “Shit!” Other than getting yelled at and flipped off by a truck on the way up to Barlow Pass, I didn’t really talk to anyone else. Not much of a day for conversation, but I enjoyed the solitude.

The 14 miles of gravel winding up gently to Barlow Pass was well compacted and didn’t have too much washboarding or potholes, though it would have been a lot harder at night. There were quite a few cars driving on the narrow road and I got a lot of dust in my eyes and mouth. It was unpleasant and made it a little hard to see where I was going. Still, I was able to reach nearly 30mph on some of the brief descents and still corner with confidence.

The tree cover was thick and my Garmin kept alerting me “Off Course” followed by an immediate “Course Found.” With only one road to choose from, I wasn’t worried about it. Occasionally the tree cover would break and, every time, there would be an incredible mountain vista. I stopped several times to take pictures. By the end of the ride, I realized that I’d only taken pictures of the mountains! Finally, in the last quarter mile, the road picked up all of the elevation (I wondered why it had been such a mellow climb) in one steep pitch that really got my heart going.

I nearly missed the control at the summit of Barlow Pass, but Peg called out “S I R?” and so I turned around before doing any regrettable descending. She made me a delicious sandwich and Kenny confirmed that I was the first rider in. I packed half of the sandwich – it’s hard to eat a lot after a fast climb – and drank another soda before taking off. The descent had some scary pot holes and I worried for the riders who would be here in the dark. As it turned out, one rider did crash on the descent and decided to end his ride, though, fortunately, he was not seriously injured.

The majority of the descent was nice enough and I was in an aero tuck for a lot of it, though the Garmin Edge 500 was still in the way. I glanced at it and noticed a warning about auto-power down. Out of battery already? I plugged it into the backup that I’d borrowed from Vinny and the device shut off! I unplugged it, turned it back on (44% battery remaining) and could not resume my activity, nor load the course from the current location! Frustrated, I threw it into my handlebar bag.

Talking to Adam Morley after the ride, I decided to buy a charger that has a cable tip with no data pins – apparently this will charge the Edge 500 while riding without interrupting the activity. If that doesn’t work, I might go back to no computer at all. Still, seeing the distance until my next turn was nice and reduced the paranoia of missing unmarked roads. And I liked seeing that when my cadence drops below 80rpm, speed suffers – regardless of gearing or grade. It encouraged more efficient riding and I don’t feel like I spent too much time staring at it. We’ll see… 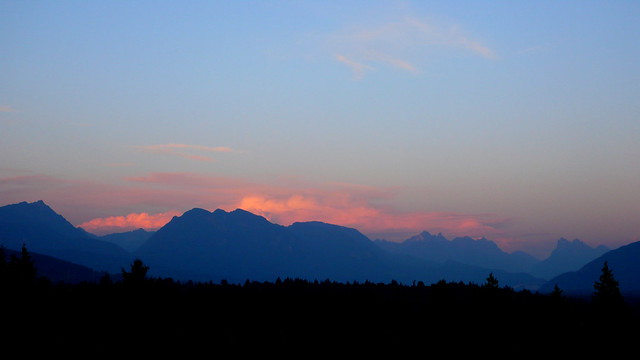 Riding the steep hills before Sultan, I was treated to some incredible views of mountains backed by pink sunset skies. A mother was out taking photos of her children against this backdrop. As I passed them, I said, “It’s incredible.” And then I worked hard on the hills, singing Dire Straights, determined to reach Sultan before dark.

In Sultan, I dashed in and out of the Chevron in a few minutes, put on my reflective vest and ankle bands, turned on my lights, and was back on the road. Ben Howard road was beautiful in the dusky light, curving along the river, no traffic. At the turn onto WA-203 it was finally dark enough that I needed a light to read my cuesheet. I fished my frenemy the Edge 500 out of my bag and started it again, accepting the zero distance reading and decided to simply calculate the new distances for each turn based on the display plus the leg milage. That mostly worked well, except for a twisty descent in Woodenville where the road changes names a few times. I had to pull over to read the sheet, only to discover that the next three cues essentially said ‘stay on this road as it twists around down the hill.’ So much for making up for speed lost climbing up the other side!

I got a little lost twice on the Sammamish River Trail due to poorly calculating what the garmin should say before the “sharp Y” where I would then find the Burke-Gilman Trail. And I missed another turn while looking for community gardens on Ravenna – I went right past NE 77th St and had to turn around. But the delays were minimal and I pulled into Jeff’s backyard at 11:13PM for a total time of 17 hours 13 minutes. I drank a beer, ate some hot dogs, chatted with Jeff, and waited for other riders to arrive.

My favorite thing about staffed brevet finishes is that I get to see the other riders. With food and drink and company, people stick around, and you get to see people who finished before and after you did. It’s a great opportunity to build on our sport’s spirit of camaraderie and I really enjoy seeing my rando buddies. I stuck around for about 3 hours until Vinny arrived and then we drove back to his place in Federal Way for a couple of hours of sleep before heading off on our next adventures.